JOE EXOTIC: BEFORE HE WAS KING

JOE EXOTIC: BEFORE HE WAS KING 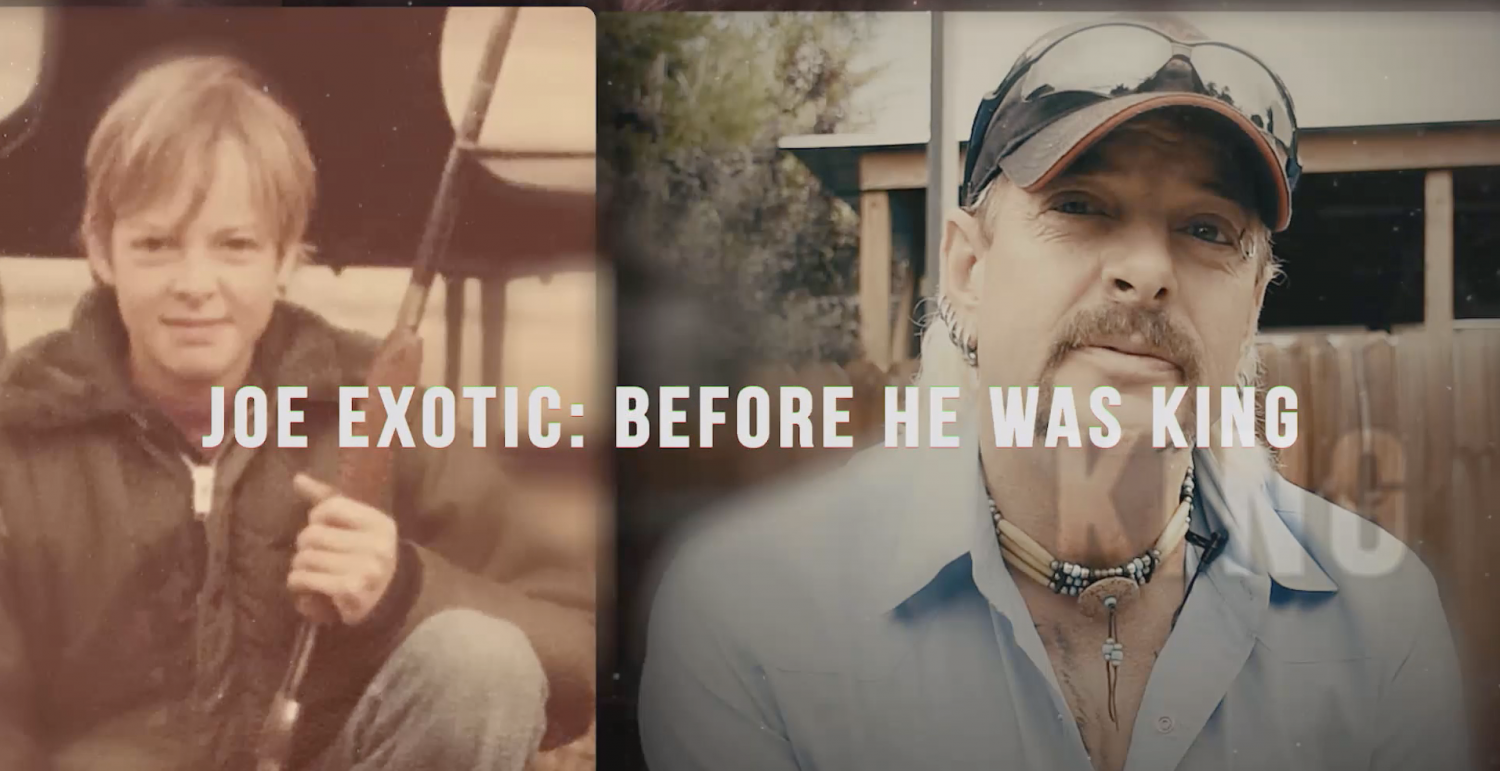 TIGER TALES OF MISSING AND MURDER: INVESTIGATION DISCOVERY UNLEASHES TWO NEW SPECIALS, FEATURING EXCLUSIVE NEW JAILHOUSE INTERVIEWS WITH JOE EXOTIC
– Beginning September 27, the Explosive Investigation into the Disappearance of Don Lewis is Explored in JOE EXOTIC: TIGERS, LIES AND COVER-UP, and is Followed by the Definitive Prequel of the Joe Exotic Saga with the Premiere of JOE EXOTIC: BEFORE HE WAS KING –

(Silver Spring, Md.) – In a matter of months, Joe Exotic and his sworn enemy, Carole Baskin, have become household names. Their saga played out for the world to see, but what has happened since the cameras stopped rolling? ID’s definitive sequel, JOE EXOTIC: TIGERS, LIES AND COVER-UP, examines the biggest question in true crime today – what happened to Carole Baskin’s husband, Don Lewis? This three-hour special takes a new look at the evidence surrounding Lewis’s mysterious disappearance, featuring exclusive jailhouse interviews from the biggest character in the world: Joe Exotic himself.

Retired homicide investigator Jim Rathmann leads the investigation to discover the truth, revealing new theories uncovered by private investigators, reliving Lewis’s final days and demeanor with those closest to him, and unpacking evidence exposed by criminal and legal experts. Punctuated throughout are interviews with those in Joe Exotic’s inner circle, including his husband Dillon Passage and members of “Team Tiger,” a group working to free Joe from jail. Beyond the controversial missing person investigation, this special also explores the criminal case against Joe Exotic and raises the question: Was Joe Exotic the predator all along, or is he actually the prey? JOE EXOTIC: TIGERS, LIES AND COVER-UP begins with Part 1 & 2 airing Sunday, September 27 at 9/8c and concludes with Part 3 on Monday, September 28 at 9/8c on Investigation Discovery.

“The bizarre and troubling saga of Joe Exotic and Carole Baskin is, perhaps, one of the most convoluted mysteries ever revealed,” said Henry Schleiff, Group President Investigation Discovery, Travel Channel, American Heroes Channel and Destination America. “In these two specials, ID will take viewers through the complete story and determine who should really be in the cage.”

Immediately following the finale of JOE EXOTIC: TIGERS, LIES AND COVER-UP is ID’s definitive prequel, JOE EXOTIC: BEFORE HE WAS KING, examining the childhood traumas and dramatic events which shaped the mind of the man who called himself the “Tiger King.” This comprehensive, one-hour special puts the entire salacious story in context and uncovers dark secrets about Joe’s past. Using exclusive and never-before-seen interview footage of Joe Exotic, including personal photos and home movies, we reveal the dark secrets that led to the colossal crash which has landed him in prison for decades.  What sent Joe Exotic down the path of depravity, polygamy, live animal collecting and trading and ultimately, conspiracy to commit murder?

Join a panel of forensic psychologists and law enforcement experts who have studied the case including ID’s own, Derrick Levasseur, as they reveal the troubled past of the man behind the hype. For the first time ever, interviews with the ‘King’s’ inner circle – including a prison interview from Joe’s second husband, Jeffrey Charles “JC” Hartpence – this special analyzes the evidence and presents a vivid portrait of his psychological descent into madness. JOE EXOTIC: BEFORE HE WAS KING premieres Monday, September 28 at 10/9c on ID.

Founded by Colin Whelan, Conveyor Media is a content production company focusing on Reality Television and Digital Content. Conveyor’s credits include the hit HGTV series “Bargain Mansions,” “Cooking On High” for Netflix and the acclaimed true crime podcast “The Chosen Ones.”

Investigation Discovery (ID) is the leading crime and justice network on television, delivering the highest-quality programming to approximately 85 million U.S. households. From harrowing crimes to in-depth investigations and heart-breaking mysteries behind these “real people, real stories,” the always revealing network challenges our understanding of culture, society and the human condition. The #1 network for women in all of cable, ID’s programming is available in both high definition (HD) and standard definition (SD), as well as anytime and anywhere through the network’s TV Everywhere offering, IDGO. For exclusive web content and bonus material, fans can follow ID on Twitter, Instagram and Facebook or check out the network’s true crime blog, CrimeFeed.

Investigation Discovery is part of Discovery, Inc. (Nasdaq: DISCA, DISCB, DISCK), a global leader in real life entertainment, serving a passionate audience of superfans around the world with content that inspires, informs and entertains. Available in 220 countries and territories and 50 languages, Discovery delivers over 8,000 hours of original programming each year and has category leadership across deeply loved content genres around the world. For additional information about ID, please visit InvestigationDiscovery.com.